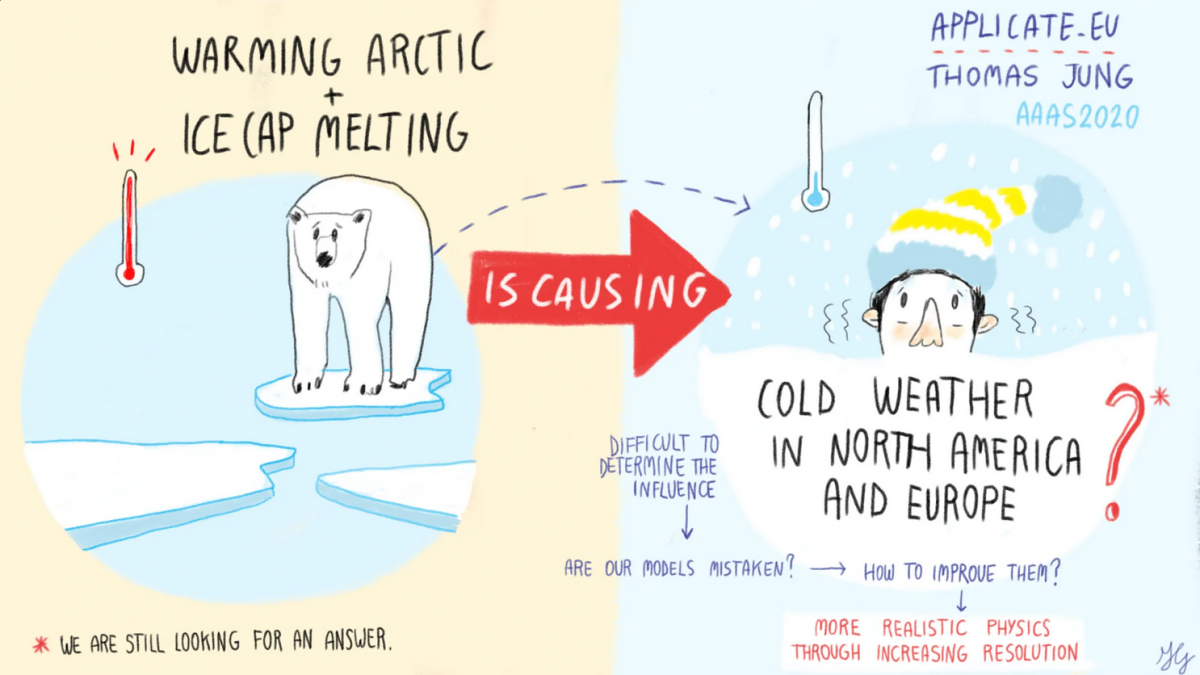 Science communication has become a fundamental element in the effort to disseminate scientific results and deliver accurate and understandable facts. A group of artists teamed up to serve this purpose: the start-up RIVA Illustrations translates scientific concepts into visual storytelling and creates amazing artworks and illustrations to describe scientific researches and projects.

A post-doc and a senior scientist wake up one morning, somewhat rested after a jet-lagged sleep in the hotel their research institute has booked. The third day of a big international conference is ahead of them, and the initial excitement for the occasion is starting to fade out. Two interesting sessions are happening simultaneously in the morning, lunch is booked to catch up with that colleague they worked with four years ago, and there is still that town-hall meeting they co-organized that needs a last-minute presentation to fill some 15-minutes of void.

Polar Prediction Live Drawing
The amount of information and input researchers receive in their academic life, and especially at conferences, seems overwhelming. Sometimes, one could consider an achievement to remember some key information from a couple of presentations they heard. Sometimes, the topic is so new that is very hard to make sense of it in a way that can be useful. A team of researchers and artists thought about this issue and came up with a brilliant solution to make science fun and more accessible. In occasion of the AAAS Annual Meeting in Seattle, amazing pieces of art came to life inspired by scientific presentations. Some of them are very close to the field of polar prediction: APPLICATE coordinator and PPP Steering Group chair Thomas Jung (AWI) presented the APPLICATE project at this meeting, in the framework of the session on “The Future of Earth’s Climate: A World of Extremes?”, organized by the European Commission and the Executive Agency for Small and Medium-sized Enterprises (EASME). In his presentation, Thomas Jung talked about Arctic research and climate and weather prediction, under the observant eyes of a most creative artist among the audience – while Thomas presented on APPLICATE, Fiammetta Ghedini produced an illustration live (see upper right picture).

Translate Research into Visual Storytelling
Fiammetta Ghedini is the co-founder of RIVA Illustrations, an agency aiming to translate research into visual storytelling using illustrations, comics or live drawings and graphic recordings. Fiammetta Ghedini has managed the ERC-funded project ERCcOMICS, which – through visual storytelling – aimed to bring a fresh look at how science communication is carried out.

For providing artwork for the AAAS meeting, Fiammetta flew to Seattle with the goal to transform scientific information and research results into live-drawn comics. As she and her fellow artists Lorenzo Palloni and Francesco Guarnaccia imprinted their impressions, the results were shown live on screen. For this, they would not only engage with the speakers at the meeting but gather information to capture the main message behind the talks and reproduce it in a graphic form available for the wider public. The artworks from the AAAS Meeting can be seen here.