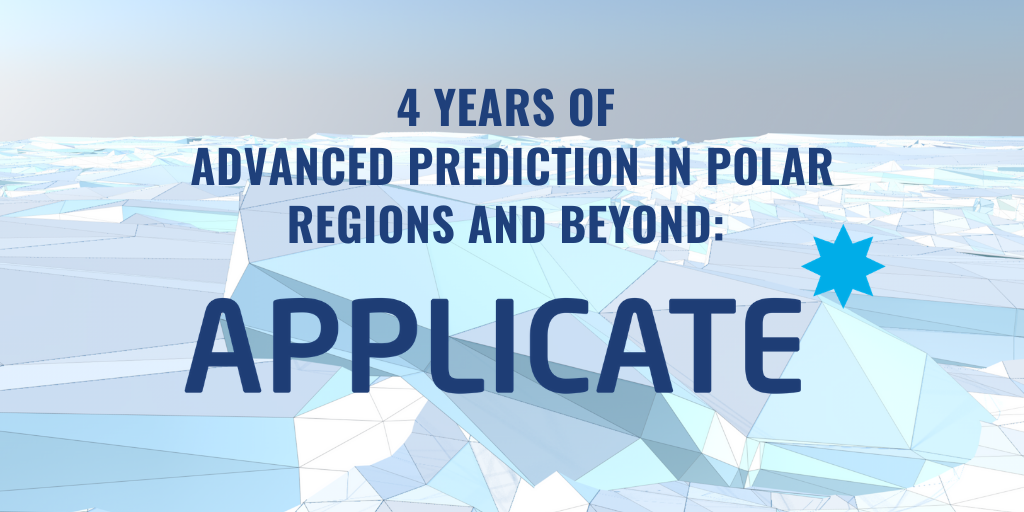 A team of experts in weather and climate prediction from 15 research institutes, operational centres and universities in eight European countries contributed to the success of APPLICATE – an AWI-led European project aimed at improving predictive capacity on polar regions and investigate the linkages between the Arctic and mid-latitudes.After 4 1/2 years of research, the project, funded by the European Union Horizon 2020 Research and Innovation programme, comes to an end on April 30th, 2021.

As the Arctic region is undergoing some of the most dramatic changes in centuries, the impact of these transformations on other regions of the world is still somewhat unknown.  The APPLICATE project was developed with this goal: to shed some light on the processes that connect phenomena like sea ice loss in the Arctic to weather and climate changes in Europe and North America, as well as to advance predictive capacity for weather and climate in the Arctic and midlatitudes. To tackle the challenge from multiple perspectives, the project coalesced European excellence by bringing together experts from the weather and climate research communities, with the aim to join forces and investigate processes and changes in the Arctic region and beyond. Nine work packages have addressed aspects such as weather and environmental model development, evaluation, advanced predictions, user engagement, observing system design and analyzing linkages. Coordinated by an AWI team, led by  Thomas Jung since November 2016, the APPLICATE project reached the finish line on April 30th, 2021.

A clear voice in the Arctic prediction debates

During the project’s duration, important milestones have been achieved to advance knowledge in understanding how the Arctic and lower latitudes may be linked. APPLICATE was instrumental in developing and promoting international collaborations like the polar amplification model intercomparison projects (PAMIP), while advancing innovative approaches and datasets using numerical weather prediction and climate models. The project’s many contributions include the coordination of model intercomparison experiments (e.g., PAMIP, SIMIP) provision of novel datasets (e.g., YOPP and ECMWF datasets), the development of evaluation software with a clear polar focus (e.g.,  ESMvalTool), all highlighting the high profile of APPLICATE’s work and representing a stepping stone in improving knowledge about climate change in support of the Intergovernmental Panel on Climate Change. Many efforts carried out in APPLICATE have led to influential papers such as The Polar Amplification Model Intercomparison Project (PAMIP) contribution to CMIP6 by Doug Smith and colleagues and Improving Met Office seasonal predictions of Arctic sea ice using assimilation of CryoSat-2 thickness by Blockley and Peterson, demonstrating not only the high quality of APPLICATE’s scientific endeavours, but also the dedication of the people involved in the project in disseminating results through a clear and open approach.

APPLICATE is also a tale of human synergies, an example of how research integration and European cooperation can lead to scientific excellence and state-of-the-art applications. Over 4 ½ years of research, participating in several networking events and exchanges with partners and projects around the world brought a new, young and vibrant community of Arctic researchers together. From the annual participation to international forums like AGU and EGU to the organization of workshops dedicated to the exchange between science and policy, APPLICATE brought its contributions into dialogue platforms with the intent to raise awareness on the topics of its research and create a wide network of collaborators and contact points. In an effort to engage with stakeholders in the region and make them aware of crucial knowledge when it comes to decision-making in the Arctic, the User Engagement team of APPLICATE has developed new strategies and successful formats to disseminate scientific know-how and establish a relation for co-production of knowledge between climate scientists,  users, policy makers and industry executives. The development of a set of resources like Case Studies and Policy Brief represents one of the most relevant pieces of APPLICATE’s legacy.Among the core activities of the APPLICATE project was also the involvement of a new generation of scientists, which concretized in the organization of training activities for Early Career Researchers like the Polar Prediction School in 2018 and the production of webinar series like APECS-APPLICATE-YOPP Online Course.

The Outlook for the APPLICATE project

APPLICATE’s legacy will live on through a set of important resources that will remain accessible to the community beyond the lifetime of the project. All the most relevant information on the results and activities of the project will be available on the APPLICATE’s website applicate-h2020.eu, on the APPLICATE Data Portal as well as on public repositories like Zenodo and Google Scholar. A fruitful collaboration with the Polar Prediction Project over the years has allowed for many of the core activities of the work packages to still find space in the PPP’s workflow and to be featured in PPP’s website and upcoming final summit.

We thank all our collaborators for the incredible support over these past four years, in particular to the members of our Scientific Advisory Board and User Group. Special thanks go to our partner institutes: the Alfred Wegener Institute Helmholtz Centre for Polar and Marine Research, the Barcelona Supercomputing Centre, the Centre of basic and applied research CERFACS, the French National Centre for Scientific Research CNRS, the European Centre for Medium-range Weather Forecasts ECMWF, NORCE Research, the Norwegian Meteorological Institute, the UK Met Office, the P. P. Shirshov Institute of Oceanology of the Russian Academy of Sciences, Stockholm University, the Catholic University of Louvain, the University of Bergen, the University of Tromsø and the University of Reading, the Voeikov Main Geophysical Observatory for the expertise and dedication they put into the project in these years and that contributed to make it a great success.

Further information on the project and its contributors are available on the APPLICATE website. 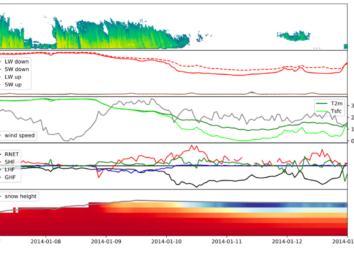