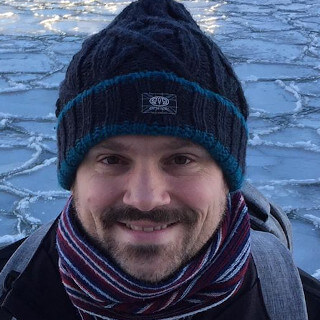 Ed Blockley leads the Polar Climate Group within the Met Office Hadley Centre which focuses on understanding climate change in polar regions and development of the sea ice model component of the Met Office prediction systems. Furthermore, he is leading the UK’s Global Sea Ice (GSI) configuration managed by the UK’s Joint Weather and Climate Research Program (JWCRP). Together with Gunilla Svensson, Ed is co-leading work package 2 of the APPLICATE project which aims to improve the representation of Arctic weather and climate in numerical models.

1. What is your working group “Polar Climate Group” working on, can you give us an example of a research question you address?

The Polar Climate Group at the Met Office Hadley Centre aims to improve our understanding of the climate in polar regions, with a particular emphasis on sea ice, the ocean, and the wider cryosphere.

One of the things that we are currently working on is trying to understand drivers of change in Arctic sea ice by performing a comparison of Arctic sea ice mass budget evolution in the latest round of climate model simulations.

Our coordination of this activity is being undertaken within APPLICATE and, under the auspices of the Sea Ice Model Inter-comparison Project (SIMIP), the study has been extended to include several international partners across the globe.

2. What are the Global Sea Ice (GSI) configurations and how are they used to predict the climate of the polar regions?

As well as trying to improve our understanding of the climate in polar regions, my group are also in charge of sea ice model development and evaluation at the Met Office.

In the UK we have a Joint Weather and Climate Research Programme under which climate model configurations are developed jointly by the Met Office and the Natural Environment Research Council (NERC). The Global Sea Ice (GSI) configurations are developed under a framework known as the Joint Marine Modelling Programme. These GSI configurations are used within several Met Office operational prediction systems, such as the GloSea seasonal prediction system, our coupled short-range weather forecasting system, and the FOAM operational ocean-sea ice analysis and forecasting system.

As well as being used for operational forecasting applications, these GSI configurations are also used as the sea ice component within the core UK climate models. This includes the HadGEM3 physical climate model and the UK Earth System Model (UKESM), climate simulations from which form the UK’s contributions to phase 6 of the Coupled Model Inter-comparison Project (CMIP6).

3. What do you think will be the main contribution of the APPLICATE project in advancing our understanding of changing Arctic sea-ice conditions?

APPLICATE is making some key steps towards advancing our understanding of how sea ice – and the change we are seeing in Arctic sea ice – interacts with the wider Earth system.

Within APPLICATE WP2 several groups have shown how important it is to take proper account of the sea ice, and overlying snow, within the atmosphere-ice-ocean coupling exchanges, which can have an impact on weather forecasts within the Arctic and beyond.

Finally, the PAMIP experimental protocol developed under APPLICATE WP3 will provide a very useful resource for improving our understanding of how changes in Arctic sea ice could impact the weather and climate in lower latitude areas such as Western Europe.