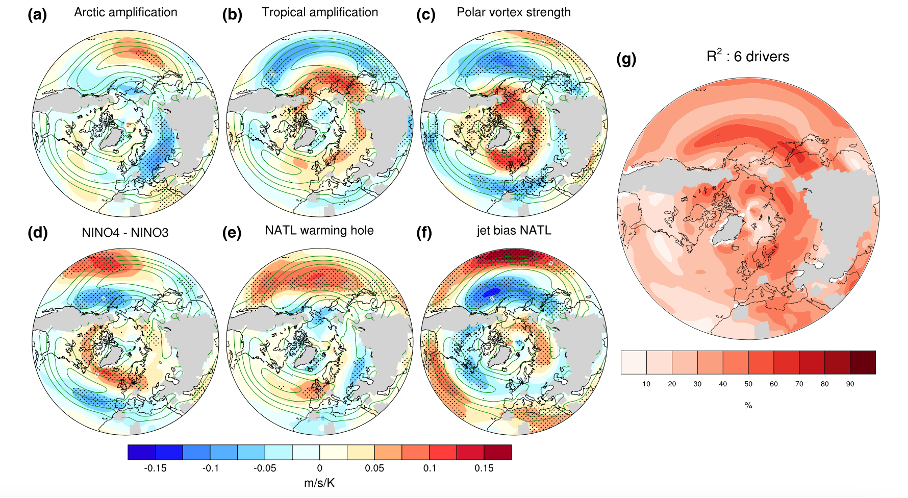 The projection of the northern hemisphere eddy-driven jet is characterized by large uncertainties. Multimodel projections from the previous generation climate models of the Coupled Model Intercomparison Project (CMIP5) show a large intermodel spread. Several factors can be considered to cause these model uncertainties, like the opposite influence of Arctic amplification and upper-tropospheric tropical warming, or the response of the stratospheric polar vortex. Other factors may also contribute here, but further investigations are needed to quantify the contribution of each driver to the intermodel spread.

In their new paper, Oudar et al. from the University of Toulouse, Météo France, have evaluated the representation of the Northern Hemisphere eddy-driven jet in the new generation of coupled models from CMIP6. Further, they have compared future projections in CMIP6 with CMIP5 models. Key questions of their study have been whether CMIP6 models show significant improvements in comparison to previous generation models, how comparable both model ensembles are, and what the main drivers of the intermodel spread are.

For their evaluation, monthly outputs from 29CMIP5 and 22CMIP6 models have been used. All models have been interpolated to the same grid size (T127). For the wind anomaly projections, the parallel RCP8.5 and SSp5-8.5 scenarios have been used for CMIP5 and CMIP6 respectively. Using these high emission scenarios allows to maximize the signal and hence the model dispersion, allowing for better investigation of each driver. In addition, the ERA5 reanalysis has also been used for model evaluation.

A set of metrics has been defined, similar to the ones used in a previous study by Zappa and Shepherd (2017) (hereinafter ZS17), with 3 additional predictors to identify other potential drivers of changes in the midlatitude atmospheric circulation. A multiple linear regression framework has been proposed, similar to Zappa and Shepherd (2017), but with CMIP5 and CMIP6 models mixed together. To reduce potential dependencies between the predictors used in the regression equation, all drivers have been scaled by the global near-surface warming in each model and standardized relative to the multimodel mean and standard derivation.

Results indicate that the representation of the midlatitude atmospheric circulation overall shows a large consistency between CMIP5 and CMIP6 projections. Model biases are reduced, although a too zonal midlatitude flow is still recognized in comparison to ERA5 reanalysis. A tripole structure observed in ERA5 over the Central Arctic is neither captured by CMIP5 and CMIP6 model ensembles. The multiple linear regression allows to quantify the contribution of each driver to the intermodel spread. The regression analysis shows similar results as presented in ZS17 when aggregating CMIP6 models to the CMIP5 ensemble.

When adding the three additional predictors to the analysis, the regression coefficients of the first three drivers are not significantly changed, suggesting a relative independence of all six drivers. Nonetheless, some changes are identified, like an absence of North Atlantic tripole patterns in response to tropical warming. By adding the three new drivers, the fraction of variance is increased almost everywhere, suggesting that the new predictors are informative, although a more detailed statistical analysis would be needed to check that this is not just a stochastic effect expected from the increased number of predictors.

As the authors conclude, no major change has occurred from CMIP5 to CMIP6, and large model uncertainties still remain. However, the analysis has suggested the possibility to add more predictors in the linear regression model. Future work may involve searching for observational constraints. Also, developing more sophisticated statistical tools to select the best combination of predictors might help to identify the main contributors to the intermodel spread.