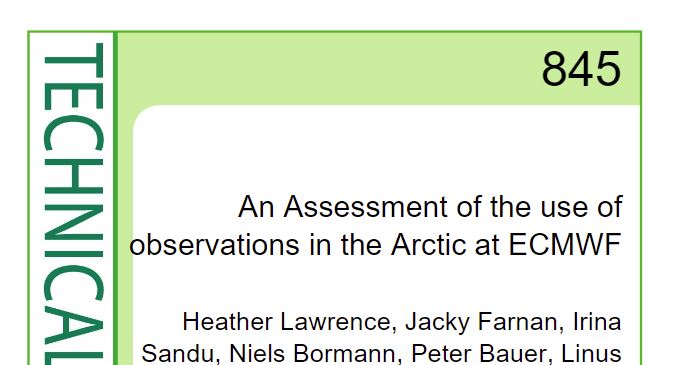 In this report we present an assessment of the use of atmospheric observations in the Arctic, and their impact on the ECMWF analysis and short-range forecasts, for recent summer and winter periods. This is based on a number of available diagnostics from the ECMWF operational data assimilation system, such as analysis increments, observation departures, Forecast Sensitivity to Observations (FSOI) and Ensemble of Data Assimilation (EDA) spread-skill relationship. This work was carried out in the context of the APPLICATE Horizon-2020 project with the aim of guiding the design and complementing the results of Arctic Observing System Experiments (OSEs).

This assessment has highlighted both the impact of Arctic atmospheric observations and the challenges related to their use. The polar regions are a particularly data-rich area in terms of satellite sounding observations from polar-orbiting satellites, whereas conventional observations are sparse north of 70N. However, the assimilation of lower tropospheric sounding satellite channels from polar orbiting satellites is more challenging in the Arctic region, especially during winter. This is due to the fact that model errors are larger and that there are larger errors in the radiative transfer model used to assimilate the satellite radiances over snow and sea-ice. For instance, mean differences between surface-sensitive microwave observations (including AMSU-A channel 5 and all MHS channels) and short-range forecasts are larger over snow and sea-ice. A proportion of this can be linked to errors in the specification of the surface characteristics in the radiative transfer model, even though model biases also contribute. Fewer observations are therefore assimilated from these channels in winter periods, and when these data are assimilated the forward model has a higher uncertainty. Uncertainties in the specification of surface contributions in the radiative transfer also affect the infrared observations, leading to a more difficult detection of clouds.

In addition, our assessment shows that background errors used in the analysis over the Arctic are likely to be under-estimated for the lower troposphere and the upper-troposphere lower-stratosphere during the winter season. To improve the use of satellite data in the troposphere, improvements in the forward model and/or cloud detection would be needed, whereas to improve the use of nearsurface data, it would be necessary to increase the background errors to avoid limiting the adjustments observations can make to the short-range forecasts in this area during the assimilation. Overcoming the challenges relating to the use of Arctic observations in winter, which are not insurmountable but require a sustained effort, would lead to better analyses and weather forecasts, but also better atmospheric reanalyses.

An initial assessment of the impact of Arctic atmospheric observations on global short-range forecasts has been performed using adjoint-based techniques (FSOI). This suggests that conventional Arctic observations appear to contribute the most to reducing the global short-range forecast error during winter, while microwave observations from polar orbiting satellites contribute the most in summer. A separate report will summarise results from observing system experiments that assess the impact of withdrawing selected observing systems from the polar regions. 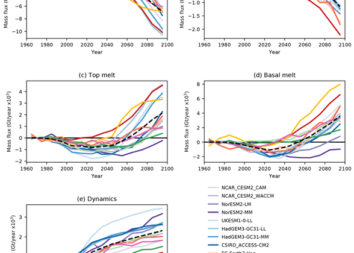