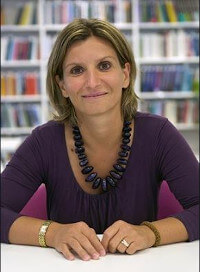 Irina Sandu is leading the Physical Process Team at the European Centre for Medium Range Weather Forecasts (ECMWF). Her work seeks to improve the representation of turbulence and of surface drag and its impacts on the large-scale atmospheric circulation in the Integrated Forecasting System of ECMWF. Irina co-leads work package 4 of the APPLICATE project together with Francois Massonet (UCL). The work package aims to use state-of-the-art numerical weather prediction systems and climate models to guide the future development of Arctic observing systems over the next decade. The work package addresses two broad questions: (1) How can we make better use of the existing observational Arctic data in order to improve sub-seasonal to seasonal predictions at high- and mid-latitudes? and (2) How would new, hypothetical observations enhance the skill of predictions further?

1. What kind of numerical models do you work with and how good are they in the Arctic?

In the first part of my career I used a range of numerical models to answer questions related to a variety of physical processes such as clouds, turbulent mixing or radiative transfer. For example, I used Large Eddy Simulations, with a resolution of tens of metres, to understand what are the factors controlling the evolution of marine boundary layer clouds, and in particular the transition from stratocumulus to cumulus layer over the subtropical oceans. Since joining ECMWF over 9 years ago, I have been working with ECMWF’s global Integrated Forecast System, which is used for producing operational global weather predictions on timescales ranging from a few days to a few months ahead. My main focus is on medium-range weather forecasts, that is forecasts 3 to 10 days ahead. Medium-range weather forecasts in the Arctic have improved in recent decades following the general trend of skill evolution of global numerical weather prediction systems, of approximately one day per decade (Bauer et al., 2015). This means that forecasts 6 days ahead are nowadays as good as forecasts 5 days ahead were 10 years ago, in certain metrics characterising the large-scale circulation. However, the skill of weather forecasts in the Arctic remains lower than in the mid-latitudes.

2. What are then the challenges that need to be tackled to improve weather forecasts in the Arctic?

What is important to keep in mind is that the improvements in weather forecasting over the last decades are due to steady advances in all key ingredients of numerical weather prediction systems: models, observations and their use through data assimilation methods to create the best possible conditions for the weather forecasts, as well as to significant advances in supercomputing. Therefore, if we want to improve predictions in the Arctic on timescales from a few hours to seasons we need to invest work in three areas:

Arctic regions pose specific challenges for each of these three areas because for example model errors are large, in-situ observations are sparse, and satellite observations are difficult to use in data assimilation because of ambiguous signal properties, despite large data volumes.

3. What do you think is the main contribution of APPLICATE to improving weather forecasts in the Arctic and beyond?

In my view the biggest strength of APPLICATE is that by design is trying to address challenges in all the areas highlighted above, and is not just focusing on one of these aspects (i.e. modelling). By the end of the project, I think we will have several success stories in various key aspects of the NWP systems. For example, our collective efforts demonstrated the need for a more realistic coupling at the snow/sea-ice/atmosphere interface, and work has been done in this direction. At ECMWF we focused on developing a multi-layer snow scheme instead of the bulk single layer snow scheme used at the moment in the Integrated Forecasting System (IFS). This would improve the representation of the snow-to-atmosphere coupling, which is one of the key elements for accurately forecasting near surface temperature (and its diurnal cycle) and snow evolution (Arduini et al, JAMES, 2019). In parallel, in WP4 that i co-lead with Francois there are a few success stories as well, related to Arctic observations and their use for improving the initial conditions for weather forecasts. We have for example learned that assimilating novel observations of sea-ice thickness could lead to better sea-ice cover predictions a few months ahead (Blockley et al., 2018). We also learned that both Arctic conventional and satellite atmospheric observations play a key role in improving the initial conditions of the weather forecasts in polar regions and beyond, but that their relative impacts depend on the season. The conventional observations play the largest role during wintertime, while the microwave radiances have the biggest impact in summer. This is partly due to the fact that we do not make the best possible use of satellite radiances over snow and sea ice. I won’t elaborate on the reasons here, but there is an interesting publication explaining these results which is just out (Lawrence et al, QJRMS, 2019). Although this understanding does not directly lead to better predictions, it does motivate us to further improve the use of satellite radiances over snow and sea-ice in the IFS in the longer term.